It's all fun(ctions) and games

When you’ve written the same code 3 times, write a function

When you’ve given the same in-person advice 3 times, write a blog post

Secondly, he’s right, and we should definitely all be writing functions for bits and pieces of code that we are using over and over again. It keeps code clean, clear, and compartmentalized. It may be a bit confusing at first, but it pays off once you figure it out, I promise.

So, let’s write some functions!

To write a function, you use the function() function. When you run the function-making code, your new function will then become a part of your R Environment. If you’re using R Studio, you’ll see it pop up in the “Global Environment” pane (under the “Environment” tab in the top right (if you are using the default) position of the R Studio window). Once you’ve got the function in your R session Environment, then you can use it! 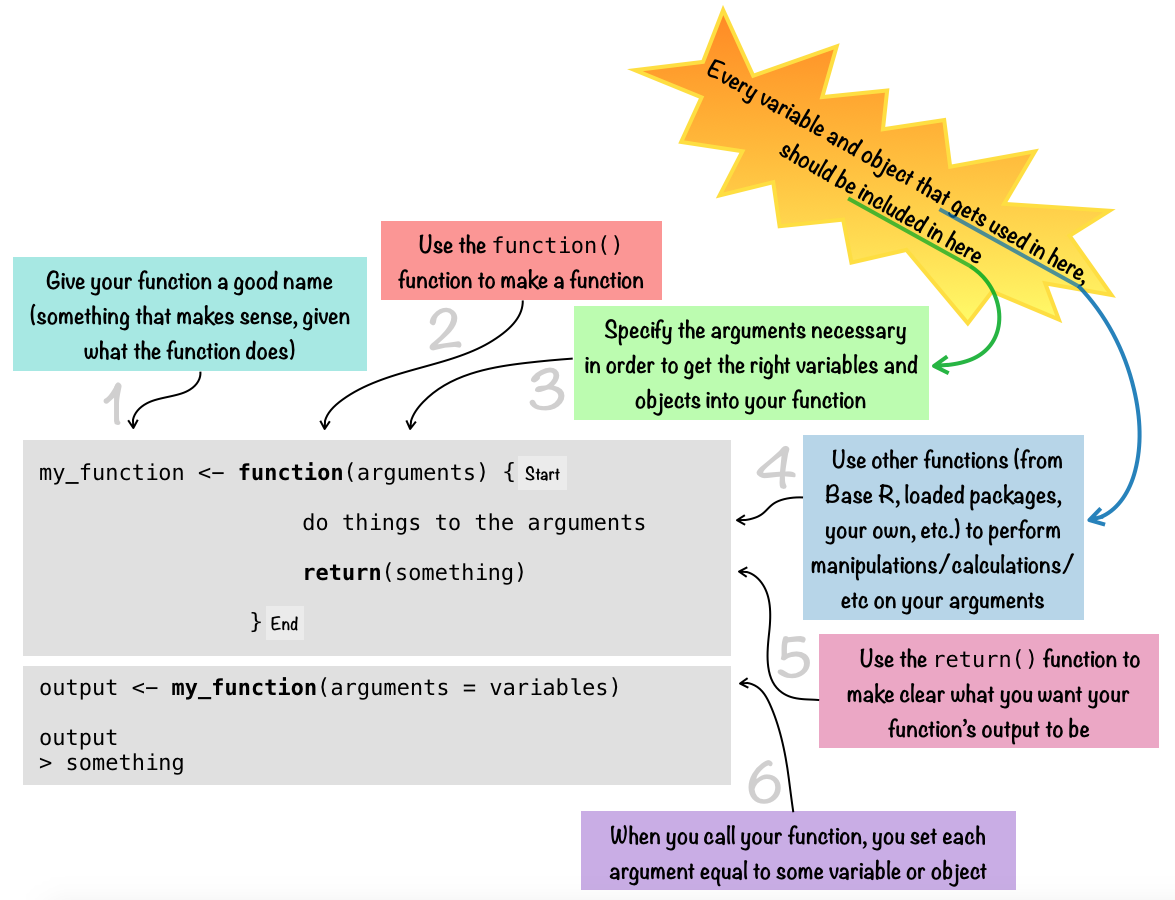 Note that the return() part of the function can be omitted, in which case your function will automatically output whatever the last thing is that was calcuated. For more simple functions especially, using return() is often overkill. But for more complicated functions that do a lot of computing, it can be really helpful to make explicit what will be outputted.

The following functions all take a single argument (pounds), and they compute the same output: pounds X 0.45359237; in other words, they convert pounds to kilograms. Notice all of the different options, and especially how the return() function works…

So regardless of what else goes on in the function, the value given in the return function is what is spit out. If there is no internal return function, the the last value computed is returned. One really important thing to notice is in the first function (pounds_to_kilos_full) at the top: inside this function, an object y is created. However, if you run this function in your R workspace, you will notice that this object does not appear in your R session “Environment.” This is one of the nice things about using functions - if you have intermediate steps in your processes that create objects which you don’t actually really need (except to get to the next step), those objects will exist only within the functions, and not clutter up your workspace.

So, you can see how, if you just run the calculations straight up, all of those objects y, z, a, output end up in your Environment. But, if you embed the calculations into a function, and run the function, then you only end up with boom (the function), and output (the final, return() object, the object that you wanted all along) in your Environment, which is much cleaner. Now imagine that the function does something more complex, and creates more objects along the way, and you want to run the function multiple times… then this discrepancy in “cleanliness” will really make a difference, and it would be much nicer to use a function.

The following are some examples of relatively simple functions that I’ve written, that I find pretty handy…

Distance caluclation: The following function is meant for situations wherin I want to calculate the step lengths (distances) between each point and the next point in a time series of locaitons. The function takes (as input) two vectors, meant to be the X and Y values of projected coordinates (imagine each as a column in a dataframe wherein each row is a location point), and calculates the distance between each one. To do this, it uses the standard distance formula \(d = \sqrt {\left( {x_1 - x_2 } \right)^2 + \left( {y_1 - y_2 } \right)^2 }\), and applies it along the vectors of X and Y coordinates (input as the X and Y arguments), first measuring between the first and second elements (X[1] and Y[1] to X[2] and Y[2]), then between the second and third (X[2] and Y[2] to X[3] and Y[3]), and so on, until it does so between the second last and the last (X[length(X)-1] and Y[length(Y)-1] to X[length(X)] and Y[length(X)]). The output is a vector of step lengths from each point to the next one, with the first position of the vector filled by an NA so that the output can be directly added to the dataframe, as a new column, and the first row of the dataframe (for which there is no step length because there is no preceeding location from which to measure) will have a step length of NA.

Get unique names from messy columns: The following function is one I used a lot while cleaning up orangutan party member data for summary analyses. I used this function on two different tables: a follow overview table - one row per focal day; and an activity table - one row for every 2-minute instantaenous sample. Both tables have columns in which the party members (other orangutans who were in association with the focal during that day / at that 2-minute interval) are listed in wide format - so one party member id per cell, in side-by-side columns. These data are not always clean, sometimes they get coded in as factors and sometimes character strings, with variations in capitalization and different individuals in different rows on different days / at different times. Often, I want to know all of the different party members for a particular subset of the data (for example, all follows of a certain focal individual). So, this function just takes two arguments, the name of the dataframe, and the indices or names of the party member columns, cleans them up a bit, and outputs all unique entries.

Note that, if you put the arguments into the function in the order that the function expects them - in the above case, this is df and then party_id_cols - then it’s not necessary to have df = __ and party_id_cols = __. It would work the same to just run get_all_unique_party_members(fake_data, 3:5). However, it’s good practice to name your arguments and is especially important incase you put them in in a weird order, or if there are optional arguments (not covered in this post). I also once lost a whole day ripping my hair out trying to debug a function that had worked perfectly the day before - it ended up that I was just calling the arguments (unnamed!) in the wrong order… so… learn from my mistakes. Name your arguments when you call your functions.

Remember that any object that is needed inside the function should be passed to it as an argument. A common error that I see when people are writing their first functions is something like this…

So you can see how the object x is created in the Global Environment, but then it’s used in the function. If x is a constant and will always be the same (i.e. in this example, x will ALWAYS be 5, and you just want your function to always y + 5), then it’s better to just use that constant in the function, rather than an object whose value needs to be assigned beforehand. But if x is subject to change values, and if x is required for the function to work, then x should be included as an argument within the function itself - ie. add_up <- function(x, y) and then you pass x into the function by setting x = whatever when you call the function. Otherwise you’re just setting yourself up for a lot of debugging work (ok, maybe not with such a simple function as this, but definitely with something more complex).

You can also set default values for arguments, when you define the function. In other words, within the function() defining function itself, set an argument = to something. This way, if you don’t set that argument when you call the function, it will use the ‘default’ value instead.

A final thing to keep in mind is that one function should complete one task. So even if you have 5 procedural steps that you want to do, it’s better to write five small functions, one for each step, than one big huge function that does all 5 things. I read somewhere once that ecologists (not sure why ecologists - if it’s just ecologists, or if the writer could only speak for ecologists, but anyways) tend to write functions that do too much. At the time, I was struggling to write a function that, indeed, did way too much, and just reading this helped me to realize I needed to break it down into smaller chunks of the process that I wanted done, and write a function for each chunk.

There is lots more that can be said about functions, but hopefully this is enough to get your started! Other potentially helpful links, including some that deal with more advanced concepts in function writing are: